Has anyone read the news lately about the chocolate and Nobel Prize connection? The study's author, Dr.Franz Messeri actually wrote it as a joke - meaning to exemplify how raw data can mislead the less than rigorous within the scientific community.  Of course, his cautionary tale-telling had to be relatively convincing for it's tutelary aspect to have any value. But then much of the mainstream media took it literally, creating an inside joke for Dr.Messeri's colleagues at Columbia University. However, there was probably more savvy involved in running the story then refuting it, so points go to both sides on that one. 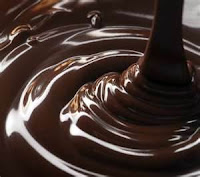 But what about the ironic possibility that chocolate consumption could increase cognitive function?
After all, it is reputed to help with everything from diabetes to depression.  A mild mood elevator/stimulant/hypertension reducer could very well help you think more fluidly. Surely, all the studies can't be bogus! Something that's so good for your blood vessels, skin, heart, and improves bloodflow to the brain, must be good for your...uh...brain.

So then, could a blood engorged, chocolate laden brain actually generate better ideas, possibly even Nobel Prize worthy ones? Unlikely, but I really don't know, even if Dr.Messeri thinks he does.
Posted by Unknown at 1:52 PM 2 comments: