Hi again.
I finally found and converted a dvd that my friend Anthony shot a few years ago. I had been contacted by a television show in Hollywood where a panel tries to guess what kind of weird job you have. I was really close to getting on, but there was only one more episode for the season, and they went in another direction. So, they never actually saw this video. In fact, you're seeing it for the first time here!
Posted by Unknown at 12:20 PM 1 comment:

Email ThisBlogThis!Share to TwitterShare to FacebookShare to Pinterest
Good Morning! I think it's about time I say a bit about how the whole Chocolate Skulls project began.

In 1993, just after receiving my diploma from The Ontario College of Art and Design, I was asked to participate in the Toronto art collective known as 'Symbiosis'. Founded by Michael Alstad, Steve Topping, and a core group of multi-disciplinary artists, Symbiosis mounted site specific exhibitions in non traditional spaces like the basement of an old office building, a 19th century church, a vacated bank, and a cosmetic surgery clinic. We called our exhibits 'Art Interventions', and we received our share of attention from both the avante guarde and mainstream press.

It was for THE BANK OF SYMBIOSIS, Ontario Hydro Building, Oct.2 - 25th, 1997 exhibit, that I began casting skulls. I mounted an installation entitled, 'A Candle for the Sinners'. It was a money tree, constructed from industrial grade copper wires, unravelled at each end to form the roots and branches. I attached 'counterfeit' bills where the leaves would be, and for the 'rocks', I made casts of a human skull in pristine white plaster.

I had to trek out to an industrial area to find the quantity of materials required to make the skull mold. When I got there, I saw products made especially for casting food. I'd never thought about casting anything edible, yet for some reason, the idea of chocolate skulls suddenly dawned on me. It seemed like a great idea - and very surreal. After a few attempts making the molds, I perfected my own, copyrighted method. I think there's a bright future in confectionary canibalism!
Posted by Unknown at 8:31 AM No comments:

Email ThisBlogThis!Share to TwitterShare to FacebookShare to Pinterest
Labels: In the Beginning... 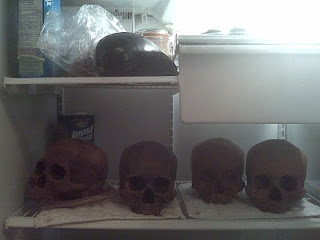 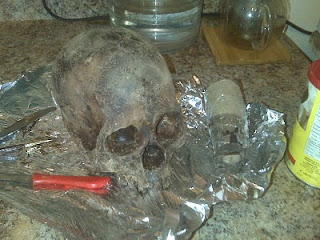 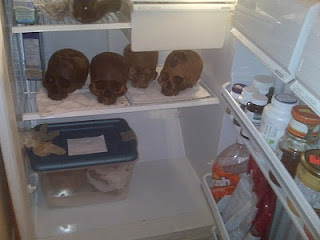 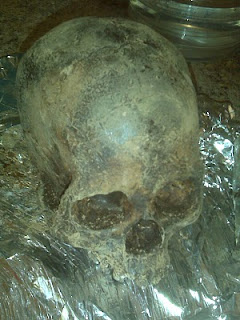 Hello!
Well today I just previewed the new shots of my skulls by Claudia Ficca.
I think they'll look incredible on my upcoming redesigned website.
In the meantime, here's a pic I took of them with my mobile phone.
Posted by Unknown at 11:45 AM No comments: 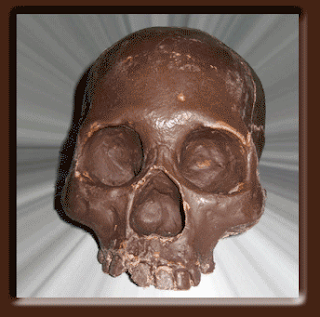 Today is a good day to begin my blog on Chocolate Skulls. It's the coldest day of the winter so far in Montreal, and my skulls have their first article of 2011 appearing here: http://www.zombieinfo.com/?cat=11.

I really should have started this blog ages ago, because my skulls have had an astounding amount of press ever since I began casting them from a real human skull. I must thank Miss Cakehead for her wonderful website and for urging me to get blogging.

2011 is set to be a big year for Chocolate Skulls. In late January, I will have them digitally immortalised by the talented food photographer, Claudia Ficca. I'm very excited about the shoot and about redesigning the website, chocolateskulls.com.

I'll keep posting here on a regular basis, whenever there's something of interest. I hope to expand my repetoire of anatomically correct confections. For now here's a list of just some of the articles posted on my delicious dead heads.

boingboing.net
Posted by Unknown at 11:14 AM 2 comments: