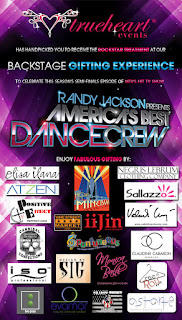 Earlier this month, Cannibal Confections received a supersized shot in the arm, from PR pundits Amy and Scott Malin of Trueheart Events. This massive dose of media magic came in the form of The Backstage Gifting Experience to celebrate this season's semi-finals episode of the MTV Hit Show, RANDY JACKSON presents, AMERICA'S BEST DANCE CREW!  I was incredibly fortunate to be hand picked by Trueheart to participate in this great oportunity, even though it fell on the day after The New Art Festival otherwise known as TNAF in Ottawa.
For all the fascinating details on TNAF, including Carl Burnet's Royal Jubilee Tea Party, please visit my other blog.

Needless to say, I would have KILLED (figuratively speaking, of course) to serve my DECAPITATED DELICACIES to the STARS myself, but my busy busy schedule just would not permit. There simply wasn't a single airline on the planet who could get me there on time. Since I don't have my own private jet, and I haven't yet mastered the skill of bilocation, Trueheart had to hire the thoroughly dashing Corey to serve as my brand ambassador. I don't even know his last name. All I know is that he's a hunk, he looks great in a black button-down, and he had lots of good stuff to say about my chocolate skulls.
﻿
﻿

As you can see, there are some pretty cool shots of Randy Jackson, Mario Lopez, and Rachael Leigh Cook posing with their very own hermetically sealed (a.k.a. boxed) chocolate skulls. I wish I'd had enough for everyone who attended, but my entire stock has sold out this month! The lesser luminaries had to content themselves with t-shirts and samples of the delicious Belgian Chocolate, so at least the poor darlings were clothed and fed!

I've really got to hand it to Trueheart Events. They know how to put it together! I'm  just an artist and a total neophite when it comes to all that branding, schmoozing and promo stuff. Trueheart Events have got it down! For example,
Hollywoodlife was onboard, The Huffington Post gave us a big shout out,  and OCTV™  (That's Orange County Television to my fellow Canucks) did a spot. - and check out Mario Lopez holding his own Chocolate Skull! I wonder if he's tasted it by now :)~